Hey everyone! Your friend, Sara here.  For International Women’s day 12 year old Aarav Kumar, a Bookosmian from Kolkata writes a special tribute to three influential women according to him, who stood out and became role models for future generations. Must read!

Aarav goes to Birla High School and is a student of Word Munchers.

Indians have played an extremely important role in the world. They are responsible for some of the foremost movements and most revolutionary discoveries in all fields, and women have played a major part in them. There are hundreds of Indian women who have inspired all of us, but some have stood out in my opinion.

One of them is Kalpana Chawla.

She was the first Indian-origin female astronaut. She was born in Karnal in 1962, but later in her life, she gained American citizenship.

From an early age, she wished to fly. However, at the time she was discriminated against. Still, she did not lose hope. After graduating from Punjab Engineering College, she moved to the USA and after a few years, began working at NASA. After gaining American citizenship, she applied to become an astronaut and was accepted. She went on her first mission on the space shuttle in 1997 and next in 2003. It was on the second flight that she tragically died due to the disintegration of the shuttle on reentry.

She exceptionally inspires me as I am fond of space and rockets. She never gave up on her dream despite being discriminated against and persevered.

If we go a bit farther back in time, we find Ahilyabai Holkar, the queen of Malwa. After her husband Khanderao Holkar’s death, she assumed command of the state. 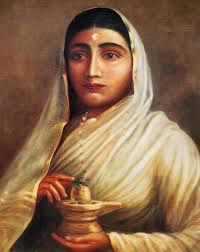 She ruled for thirty years and was known for being an absolutely ideal ruler. She ruled with the utmost compassion and under her the kingdom reached new heights. She was also called the ‘philosopher queen’. She even bravely lead armies into battle herself.

As a tribute, Indore’s airport and university are named after her. She is a true role model as she ruled a state wisely and properly when women were not even allowed to hold such posts. She is an example that anyone can do anything.

Following your dreams is important, and it certainly was for Matangini Hazra. Not much is known about her early life except that she was born in Tamluk in West Bengal to a poor peasant in 1870.

In 1905, she became interested in the Independence movement. She participated in numerous protests and was jailed too, nevertheless, she didn’t lose spirit.

One day in 1942, at the age of 72, as part of the Quit India movement, she was leading thousands of supporters to take over the Tamluk police station. As she stepped forward to request the police not to fire, she was shot. She continued moving on, chanting Vande Mataram, until finally, she died due to the firing by the police.

Matangini Hazra’s determination to free her country was admirable and she is proof that whatever age you are, it is never late to show patriotism.

These women are only three of the hundreds of inspirational women across India. They have played an integral part in the history of India and will continue to inspire future generations.

Hey, your friend Sara here again! Enjoyed reading? Want to get published on this global writing platform and become a Bookosmian?

Here is how to-