Hi everyone, Sara here! How far into fairyland can our imagination go. 8 year old Dia Nanavati from Ahmedabad explores the limits in this fantasy tale, both through words and her creative illustrations.

Dia is a student of Anand Niketan Satellite school.

Once upon a time there was a unicorn named Unic. She had no owner. Unicorn lived in a distant land named Fantastic Magical. 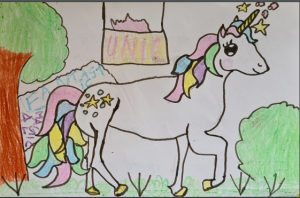 One day Unic went to wander around Fantastic Magical. She reached the  middle of the distant land and found an unusual creature. She inspected the
creature and exclaimed, “Oh it’s a Pegasus!” 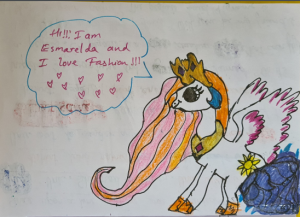 (A Pegasus is a horse that has wings and can fly).

Unic asked Pegasus, “What is your name?Will you be my friend? ”

Pegasus said, “My name is Esmeralda and yes I will be your best friend. What is your name?”

One day both the best friends went to wander around on the creature flyer.  Soon they were out of Fantastic Magical. They reached our land Earth.

“Where are we? What is this place?”

“Should we go in this place?” asked Esmeralda.

Soon both the friends came through the Earth’s atmosphere.

They reached the house of a girl named Hersini. 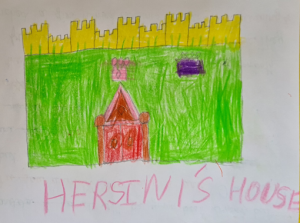 It was evening and the two friends  fell asleep in Hersini’s garden. When Hersini came back to her house and went in her garden, she was fascinated at what she saw.

When Unic and Esmeralda woke up, they both introduced themselves, and so did Hersini. 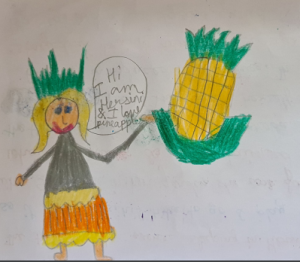 The two friends stayed at Hersini’s home for four days. In the four  days they learned a card game called Rummy and they had a lot of fun.

Soon they left Earth and reached Fantastic Magical and the three friends lived  happily ever after.